The science behind 'Unknown Pleasures'

The album cover of Unknown Pleasures by Joy Division has to be one of the most iconic covers of the 70’s/early 80’s: 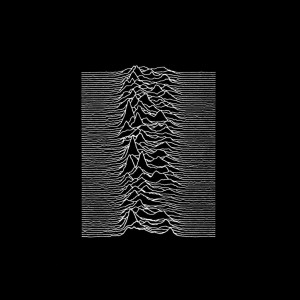 The artwork has been re-used and reprinted a lot and is still abundantly present as T-shirt at most music festivals.

But every time I saw this image I wondered… what do those white lines actually represent (if anything)? It turns out the story behind the white lines makes the artwork much cooler!

At Cambridge University in 1967 a 24 year old student named Jocelyn Bell was analysing a huge printout from a radio telescope. This telescope was built by Anthony Hewish and his group of students to look for quasars. Quasars are the dense centers of super massive blackholes, they emit lots of radio waves and visible light. During the analysis Jocelyn noticed something strange, there appeared to be a signal repeating very quickly, at about 1.337 seconds. Surely this had to be some interference from earth, because this isn’t something a quasar could produce.

After some research they could rule out a lot of earth-noise, microwaves, French radio signals, police radio and much more. They found out the signal also didn’t follow ‘earth time’, the normal 24 hours we follow, but rather the sidereal time (star time). In short, when they pointed the telescope to the object again (after earth had rotated) it would be in the same position after 23.9344699 hours. This is a key indicator the signal didn’t come from earth but rather from deep space. Nothing they had previously seen or read about in space could produce such a signal. Jokingly they initially named the signal ‘LGM1’, short for ‘Little Green Men #1’.

The discovery sparked interest from all over the world, and a year later (1968) scientists had come to the conclusion the signal had to come from something called a neutron star. When a star (larger than our sun) collapses it explodes (this is called a supernova), expelling a lot of material into space. This material, stardust, is literally what we are made of! No other process known in space can produce ‘heavy’ elements like iron, nikkel, gold, silver and platinum. Initially people thought this exploding star didn’t have a ‘corpse’ and all matter was blown into space.

In 1934 however, just a year after the neutron was discovered two scientists named Walter Baade and Fritz Zwicky predicted the existance of a neutron star. When large stars collapse they expel stardust but also leave behind a dense neutron star. This star, made of super heavy material, spins around producing radio waves. This is what we now call a pulsar. The signal from Bell and Hewish was the first observed pulsar, now named PSR B1919+21.

If we look at the Cambridge Encyclopedia of Astronomy there is a page on the discovered pulsar: 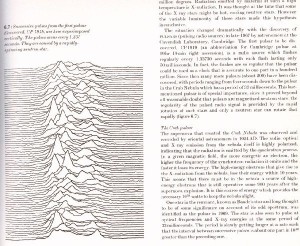 The image on the left page is the same as the album cover, it is the signal of our pulsar: PSR B1919+21