I’m back home from Devoxx, I’m still alive (kind of) and it was great!

First of all, I had never been to Devoxx before, so it was all a new experience for me. And second, I was speaking at this conference, which is my first international talk! In this blogpost I’ll try to describe how it is, talking at Devoxx.

Before the talk, other sessions

There were a lot of good talks on Devoxx this year, mostly about HTML5, Android and new languages (like Clojure, Scala, Fantom, Ceylon). But to prepare for the talk I decided to stick with the sessions which had the well known international speakers (Joshua Bloch, Mark Reinhold, Brian Goetz, Chet Haase and of course the JavaPosse guys). Instead of learning new technical stuff I focused more on learning presentation skills instead.

The first day I also brought my camera with me, and created the following video (which is currently featured at the Devoxx.com frontpage):

My own session was planned on Friday, the last day of the conference, in the last slot of the day. Initially I didn’t like this spot (especially since it was the day after the Noxx party!), but when I saw the line of people waiting for popular sessions like Joshua Bloch’s and/or the JavaPosse I was very glad I wasn’t scheduled at the same time as them.

When I arrived at the venue Friday morning I noticed the room I was scheduled in was empty and being torn down… that didn’t look promising! But I quickly found out that ‘room 6’ was now in cinema room 4. And until the last moment the screens on the floor didn’t show my session and the session (from David Geary) before me. So I didn’t have a lot of hope, only my own colleagues would probably be able to find it…

Then suddenly David Geary was done with his talk (HTML5 Game Development: The most fun you can have in a browser), time flew by… time to go to the front of the stage and prepare the laptop. When connecting the laptop I saw a huge line of people, queuing to leave the room… sigh. So I went to the sound-guy, getting a microphone strapped to my head, and warned the cameraman that I have the habit of walking around like bored zoo animal. He was playing some World of Warcraft in between the sessions, so I challenged him: you can practice your aim on me instead the coming hour.

Then I looked back up at the audience, and to my pleasant surprise, the room was loaded. I quickly snapped this picture: 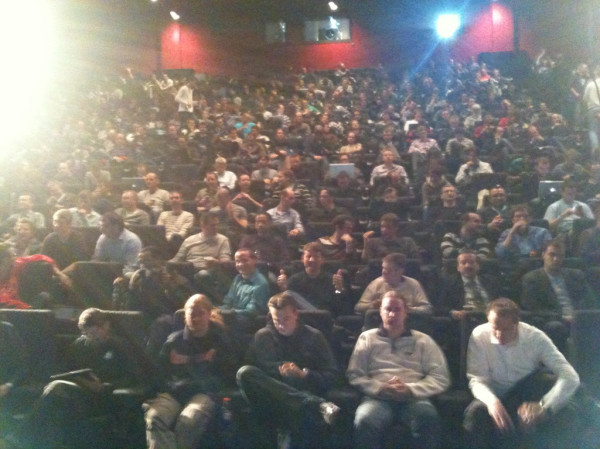 Wow! And it kept getting more and more crowded, in the end people were sitting on the steps because all the seats were taken. Then the timer was suddenly at 59:50, my talk had begun! The microphone was open and I started talking to the audience. Up to this point I wasn’t very nervous, but now I had to talk to all these people, in a foreign language (English). After the first joke landed, and the people reacted like I hoped, my confidence returned. During the talk I had to explain something with a bright orange stick, and before I knew it I was waving the stick around like a nerd jedi. Suddenly I remembered the poor cameraman, but one quick glance at the screen behind me and I could see he was doing an awesome job tracking my every move.

When the countdown reached 18 minutes, I was pretty much done with the talk, but I was anticipating a lot of questions and I had an anti-patent rant ready. For the next 13 minutes I answered a lot of good questions. Then I decided it was time, I took the liberty (being the last talk) to thanks the audience and tell them Devoxx was now over. Something like: “This is the end of our Devoxx for this year! Have a safe trip home, and hopefully I’ll see you all again next year!”

Afterwards a lot of people congratulated me, and I’ve seen some great tweets about the talk. It felt great and recommend it to everybody: Just do it!

The slides can be found here: http://www.slideshare.net/royvanrijn/what-shazam-doesnt-want-you-to-know

And the talk will be freely available (with video, slides and screen capture!) on Parleys.com some time in the future (could take a while, months).